Viggle Inc. goes to great lengths to analyze and evaluate the effectiveness of advertising and promotions on its platform. In addition to in-house research, Viggle Inc. partners with leading market research firms to generate an objective perspective of campaign performance. Select examples can be found below.

Viggle partnered with Nielsen to evaluate the effectiveness of Viggle advertising, and whether exposure to an ad on both TV and Viggle would lead to an increase in key advertiser metrics compared to exposure from a TV campaign alone.

Using the advertiser’s on-air media plan and Viggle users’ audio-verified TV check-ins, Viggle was able to target the test ad to users, creating groups of users who were exposed to the ad on TV-only, on Viggle only, and on both screens at the same time. A Nielsen-designed survey was sent to users in each group to confirm their exposure to the ad and test a variety of recall and metrics. Nielsen analyzed the results of the test.

Viggle users exposed to the ad on both screens displayed a statistically significant lift in all five recall metrics: General Recall, Ad Recall, Message Recall, Likeability, and Purchase Intent. Most notable was a 46% increase in likeability and a 20% increase in purchase intent among the dual-exposed group compared to the TV-only exposed group.

Viggle has tested many levels of editorial promotion to determine its impact on tune-in and engagement over time.

In this test, Viggle promoted “Keeping Up with the Kardashians” on July 21st with significantly higher Viggle Points for checking in and for engaging with the Viggle LIVE companion trivia game. The weeks before and after the test week, this show received standard Viggle Point promotion. 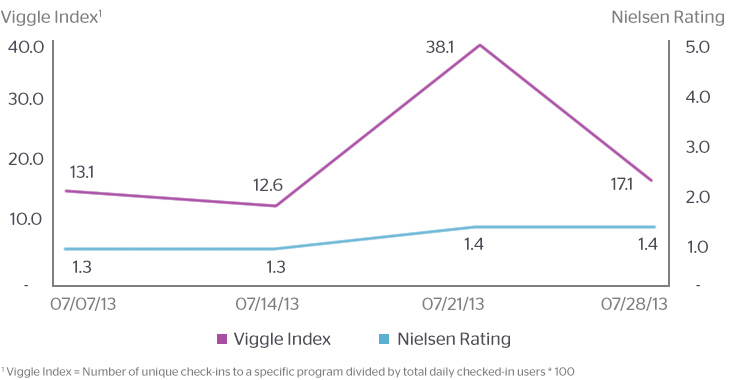 Viggle sent surveys to users in the advertiser’s target demographic who were exposed to the target ad in the Viggle app. The results were compared to a demographically similar group of Viggle users who were not exposed to the ad.